The wonderworker – Archibishop of Myra 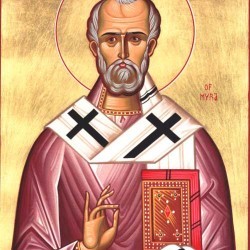 Saint Nicholas was born late in the third century of a wealthy family in the city of Patara, in a region of southwestern Asia Minor that was known as Lycia. Early in his life, upon the completion of his education, he was Ordained to the Priesthood. Upon the death of the Saint’s parents, he set aside his patrimony and, over time, gave it away to the poor. That philanthropic disposition was most characteristic of the Saint, the virtue of charity shining above all else during his life. The Synaxarion notes, in that regard, that Saint Nicholas “regarded himself merely as the steward of goods which belonged to the poor….”[1] Famous is the story of the poor man with three daughters who had no money to provide the dowries necessary in those days for a proper marriage. Thus, it seemed, that the girls were doomed to a life of ignominy, of dishonor, more than likely of slavery, or even worse. However, Saint Nicholas secretly provided a bag of gold coins on three separate occasions, which the father used to assure good marriages for his three daughters.

Early in the fourth century, Saint Nicholas was elected Bishop of Myra, an important seaport nearby his home. The people of Myra were delighted with the choice since, throughout his life, even when he was quite young, the Saint was recognized for his piety. Not long after his enthronement as Bishop, the Emperor Diocletian ordered the suppression of Christianity throughout the Empire. And so began what is sometimes called the Great Persecution, in which huge numbers of Christians witnessed for Christ. Now, it is noteworthy that this persecution was particularly harsh in the eastern half of the Empire where Diocletian’s subordinate, Galerius, ruled. Since Christian clergy, especially Bishops, were prime targets, Saint Nicholas was seized by the authorities and locked in a Roman prison. Doubtless, he suffered tremendous privation there, since it was well known that Galerius especially enjoyed seeing Christian clergy insulted and humiliated. By God’s will, however, the life of the Saint was preserved. We next hear of Saint Nicholas after Saint Constantine’s accession to the imperial throne and the Edict of Toleration, which decreed the legalization of Christianity. [2]

St. Nicholas is known by the appellation “the Wonderworker.” Saints of God, by their singular and unswerving devotion to Christ and to the Orthodox way of life, become true Friends of God. By the power of God Himself, such men and women intercede with God to assist those who appeal to them. That is true during their lives here on earth, and even after their repose. People are helped throughout all sorts of misery and calamity by their intercession.

Saint Nicholas helped those in difficult straits during his life in Myra, and has never ceased doing so, though seventeen hundred years has passed since the time of his life. Let us consider some examples: When, at the time of his reign as Bishop of Myra, his city was afflicted with severe famine, a ship loaded with grain happened to be sailing nearby. Although the captain was intending to bypass Myra, Saint Nicholas miraculously appeared to him, telling him of the suffering of his flock from starvation and asking him to sail into the harbor of Myra. The captain obeyed the Hierarch, and the city was saved.

On another occasion, three soldiers were unjustly accused of plotting against the imperial government, a crime for which they were sentenced to death. But Saint Nicholas appeared in a dream to the Emperor who then ordered the matter investigated. Discovering that the soldiers were innocent, the Emperor had the charges dismissed and the soldiers restored to their former rank. The soldiers, grateful for the intercession of the Saint and having become more mindful of the power of God, became monks.

There are many stories of Saint Nicholas saving ships in distress, and of calming the violent winds at sea. In one of these stories, it is said that when a certain ship was endangered by gale-force winds, Saint Nicholas appeared at the helm and sailed the ship safely into harbor. On another occasion, when a passenger fell overboard into the sea and cried “St Nicholas, help me!”, the man instantaneously found himself sitting at home, his family gathered all around him and astounded by his sudden appearance out of thin air.

Saint Nicholas reposed in the year 346. It is written that at his death “the people lamented the loss of their pastor and their providence, through whom they had received so many benefits, but the angels and Saints rejoiced with great joy to receive the meek Nicholas among them.”[3] He was buried in a tomb in his Cathedral, which quickly became a place of pilgrimage, all the more so when his Holy Relics began miraculously to exude fragrant myrrh, which they still do to this day.

In the eleventh century, when the Turks were overrunning Asia Minor, the Holy Relics of the Saint were taken from Myra to Bari, a seaport in southern Italy, near the “heel” of the Italian “boot.” Some believe that the Relics were stolen, while others write that the Greek Orthodox of Myra cooperated in the transference of the Relics, to save them from desecration at the hands of the Turks. It is probably impossible to know for sure which was actually the case after the passage of a thousand years. At the present time, the Saint is entombed in a crypt beneath the huge Basilica di San Nicola, a Roman Catholic edifice built just after the translation of the Relics.

Saint Nicholas is commemorated on December 6th, the day of his repose, and also on May 9th, the day of the translation of his Relics from Myra to Bari.

There is no Saint as widely honored as is Saint Nicholas. Thousands of churches are named after him as well as many cities. His veneration is widespread among Orthodox, of course. First of all, he is greatly venerated in Russia and Greece. In Russia, he is the Protector of crops. In Greece, he is the Patron of the Greek Navy. But his memory is celebrated as well in Serbia, Romania, Bulgaria, Italy, Ireland, Portugal, Germany, the Netherlands, Belgium, Albania, Slovakia, and elsewhere. In several cities of the United States, there are special celebrations on his Feast Day. And so we see that in Orthodox and non-Orthodox countries, he is greatly esteemed.

May he continue to bless us, to guide us, and to protect us throughout our lives.

“The truth of your actions proclaimed you to your flock as a rule of faith,
an image of meekness and a teacher of self-control;
and so you gained through humility the things on high,
through poverty riches, O Father and High Priest Nicolas;
intercede with Christ God that our souls may be saved.”